Brick à Brack becomes the owner of Brickfilms.com, click here to find out more.
Become a member and enjoy many benefits, it's fast and free!
Brickfilms • Time Cruisers: Origins 1: The Time Traveling Banana
InformationPostproductionViewingBehind the scenesTrailer

Quirky scientist Dr. Cyber and young assisstant Tim test the professor's time machine, while the sinister Tony Twister tries to put an end to the experiments.

Made for #brickfilmday2022, check out the other videos here: https://www.youtube.com/playlist?list=PLEZK_ot8DnYLqL5RhNaq6vUOmfeShvL-p
Production team Quirky scientist Dr. Cyber and young assisstant Tim test the professor's time machine, while the sinister Tony Twister tries to put an end to the experiments.

My Time Cruisers is only loosely based on the original KLICK comics by Kim Hagen, but it does adapt some of its characteristics. The Time Crystal, for example, will work a lot like the Zapper in the comics. The main similarity, however, is the world-view: I also want to incorporate a lot of different LEGO themes into the series and this first installment already has many Easter Eggs.

We can see some references to the Adventurers, Ice Planet 2002 and Alpha Team themes, which all will play larger roles in future installments of the series, but the most important theme to be featured is Knights Kingdom II. We learn the the Time Crystal is the same artifact that the Knights' used as the Heart of the Shield.

Another interesting reference is the LEGO Racers 2 video game. The exterior of Tim's home was modeled after a building in Sandy Bay, because that's where the movie is set (which also makes it take place in the same town as Let's Start from the Beginning...) 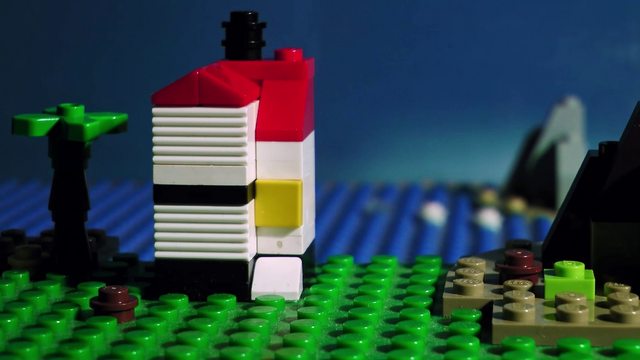 This and much more will be explored in later installments of Time Cruisers!

Here's a short VFX breakdown video, showcasing some of the visual effects of Chapter 1:

I started writing the music for this film very early in the production. I really enjoy creating the soundtrack for my own brickfilms, and this was probably the most fun part of making this film.

I wrote the first version of the main theme some time in 2016, and I created an instrumental demo version of it in 2017. Instrumental, because I actually wrote lyrics for the song because back then I imagined a 2D animated intro for the film.

This was that first instrumental demo:

This first demo was very half-baked and amateur, but later in 2017 I re-arranged it and it became a more refined version, part of which was used in the Winter Sock Productions intro:


This version had a lot of electronics too, but I added the sounds of ticking clocks and reversed audio, which served as a sort of "style template" for the entire music production, as you can hear it in the finished film. I haven't released the full version of this yet, because I'm planning on using it in later chapters of Time Cruisers: Origins.

The next step, after composing the Time Cruisers theme, was composing a theme for the villains, the Time Twisters, who're represented by Tony Twister in this first chapter. His theme stems from the main theme, but it's in a different key and rhythm, and it has some dark and sinister instruments. I composed this theme back in 2017 as well, and it made its debut in 2020's Let's Start from the Beginning.


But for the final video I composed some new music for Tony Twister, but still based on this original, 2017 theme, to fit the mood of the scene better and to have a cohesive soundtrack.

For the final music I composed 4 brand new tracks, all of them based on the previously created themes. I used many synthesizer sounds and electric guitars, because I feel that this electronic style suits LEGO in general and the quirkiness of the Time Cruisers theme really well. I also used some of Spitfire Audio's great orchestral samples to make the music warmer and some delay effects, ticking watches, bells and cuckoo clocks to integrate the time travel theme into the soundtrack as well.

And here you can listen to the entire, finished soundtrack album of Chapter 1: Wow. A magnificent brickfilm. You had already caught me with the time cruiser range. There are very nice postprod effects. Original camera shots (with the magnifying glass). The microscale of the 6494 set and the little details of the range here and there. The small crossover with the knight kingdom range looks very promising Thank you so much, @Max_LG ! And I'm so happy that you noticed all the little details and easter eggs.

Very cool, I can't wait for the next one in the series! What are the icons at the end? I recognize Krita and Blender of course, what are the other two?

Thank you, @thistof ! The colorful petals are the icon of DaVinci Resolve, a free editing, color grading and VFX software (it's really good, I highly recommend it), and the orange lines are the icon of Cakewalk, a free DAW. This one has its flaws; I previously used LMMS, which had a lot more intuitive workspace, but Cakewalk lets me compose to video, which is very convenient. Amazing brickfilm. The beginning reminded me a little bit of the beginning of the first Back To The Future movie. Great animation and lighting, well done VFX, and a fun story. Great job!